So begins our adventure with Connie

Having taken early retirement. and needing a new project to fill our time, we finally decided to take our son-in-laws advice and buy a van, and convert it to a camper.

With Jason’s help – he works in the motor trade, we found a silver Peugeot Boxer L3H2 van, with side and back windows, and a gas heater and decent mileage. We had decided that a retro cramped van was not our style, and wanted comfort and space, and room for the men to stand up.

So begins our adventure with Connie.

Our first step to the conversion was a trip to the Camping and caravan show at the NEC, Birmingham, to get ideas. This helped enormously in our final design.

We opted for a bed/settee across the back, kitchen down passenger side in front of side door, and shower room and fridge etc along the drivers side.

So we now had ideas and a van, and we hit Ebay to get stuff, and I mean LOTS of stuff. 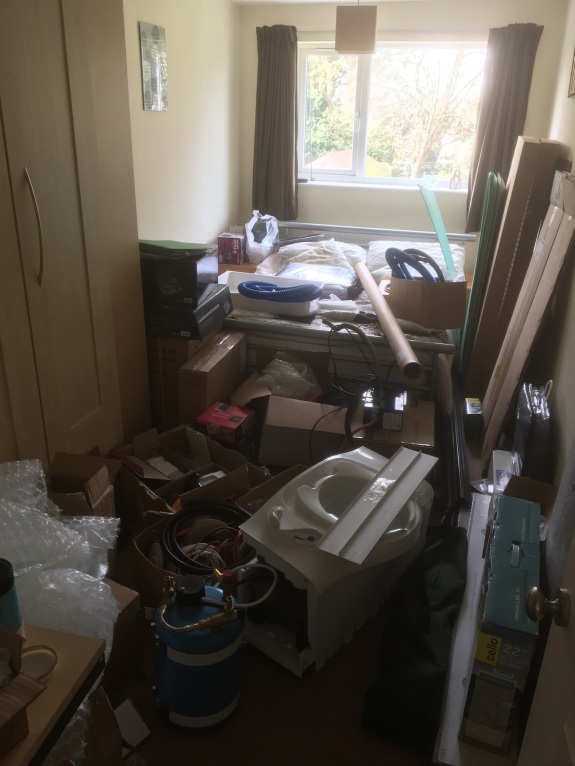 So now we had to start work, so we could reclaim the spare bedroom.

First step was to fit a reversing camera, and Jason and Kirsty replaced the side door window with an opening window as the kitchen would be along that side.

Second step was to remove the existing tatty ply boarding, and start over again with good insulation.

All stripped out and dead mat going in

Where do we start?

First we put up Dead Mat sound insulation, and this proved worth every penny, as the previously rattly van was now quiet to drive.

Next we put in 2 layers of Celotex insulation, and used recycled Plastic Bottle loft insulation in the small spaces.

At this point the wiring plan had to be completed, and first fix wires installed, making sure wires were fed through struts rather than just behind insulation. Extra wires were also fed through in case the design changed.

We then cut new side panels from 9mm ply and carpeted the panels with light grey carpet lining.

Next step was to fit a bed – we had planned to build one from wood, but when we saw this ready made metal bed we opted for that instead. As we like our comfort, we left space at the back to extend the width of the bed to King size.

This was firmly bolted to the side panels and to the floor.

Our plan allowed some room for a small hanging space next to the bed and then the shower room. As we had bought a Thetford C402 Cassette toilet, we had to work out where the door would go, and work around that to position the shower room.

Once we knew roughly where it was going, we put up the back wall against the driver side wall of the van, and covered it with white PVC sheeting ( it has a protective blue film at this stage) cut to size.

Then we checked the toilet fitted, and bravely cut a hole in the van for the door.

A timber frame was then built around the toilet and shower base, the PVC fitted inside, heating gently with heat gun to bend the top to fit, a ceiling put in place and the walls insulated (for sound!).

Next was fitting the opening roof fan. These are NOT designed for van roofs, but we got there in the end, after our first try leaked. While we were working on the roof, we fitted a Solar panel, so we would not be reliant on mains power. 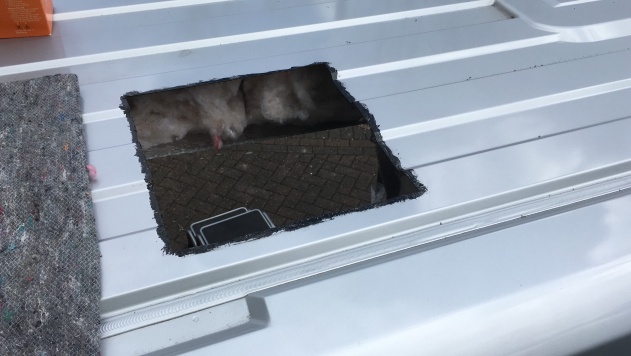 A hole in the roof

Side wall of shower room

Wiring for the fan and bathroom light was also fitted at this stage.

Next we had to fit the 15mm lightweight 5 ply laminate boarding outside the shower room.

I had chosen some fabric for the seats, and we were planning on a light grey wood effect panel, but when we viewed the sample I didn’t like the shade as it was too beige, and instead opted for ‘Blue metal’, a duck egg blue laminate with a metallic sheen.

The board is in large 2500 x 1220 mm boards and was not cheap, so first we cut a cardboard template, then transferred that to hardboard, before cutting the board. I found that my circular saw was too rough for the job and resorted to a jigsaw, with good narrow laminate blades.

Then we laid Wood effect laminate flooring for a tough, easy clean finish. 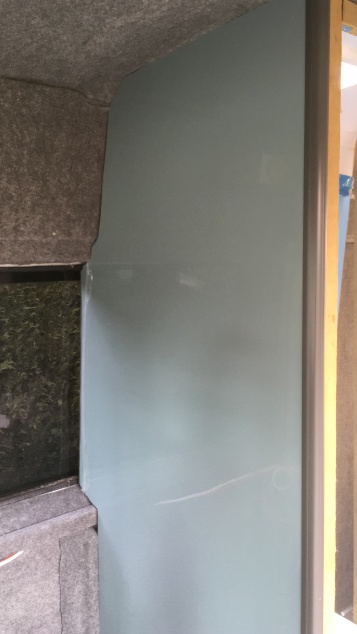 Front wall to bathroom fitted, covering part of side window 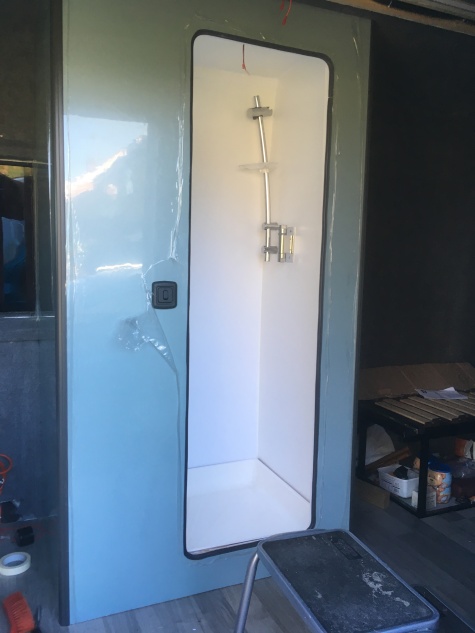 Door side of shower room fitted

We had bought the recommended drill blade for fitting the t-strip, but found it hard to work with, and it wouldn’t fit into corners, so got a new small router and special t-strip blade. This worked brilliantly, and most of the t-strip did not need gluing.

The light fitting in the shower has 2 settings, bright and dim, so mid night trips to the loo don’t wake the whole site. A standard shower is fitted, with plumbing going out the back wall into the wardrobe.

Next we decided to fit the fridge and microwave, as they were the largest objects lying around. We planned to put the microwave at head height, but once we saw it could fit above the fridge we went with that design. The fridge is electric low powered, so doesn’t need gas, and had a removable ice-box. The solar panel will run the fridge on sunny days.

The microwave can be removed, and the space down the side was made into a 2ltr bottle store, topped off with 18mm worktop in grey. 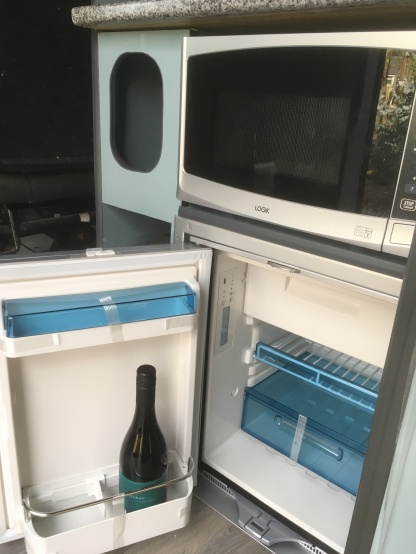 Ian fitted the electrics for both mains and 12V. This includes 230V sockets for the water heater, microwave and kettle. 12V for the fridge, TV and Bluetooth amp. The lights are all LED, with a colour changing strip light in the ceiling. The leisure battery has a solar charger a mains charger and a B2B charger so we can use powered and un-powered pitches.

Jason fitted the clean and waste waters tanks underneath the van and drilled the holes for the plumbing.

Next we built the kitchen units, and fitted the sink and double hob into the worktop.

The gas bottle has a door at the back which can be accessed from the side van door when open.

The cupboards have shelves for food, and space for a bin. 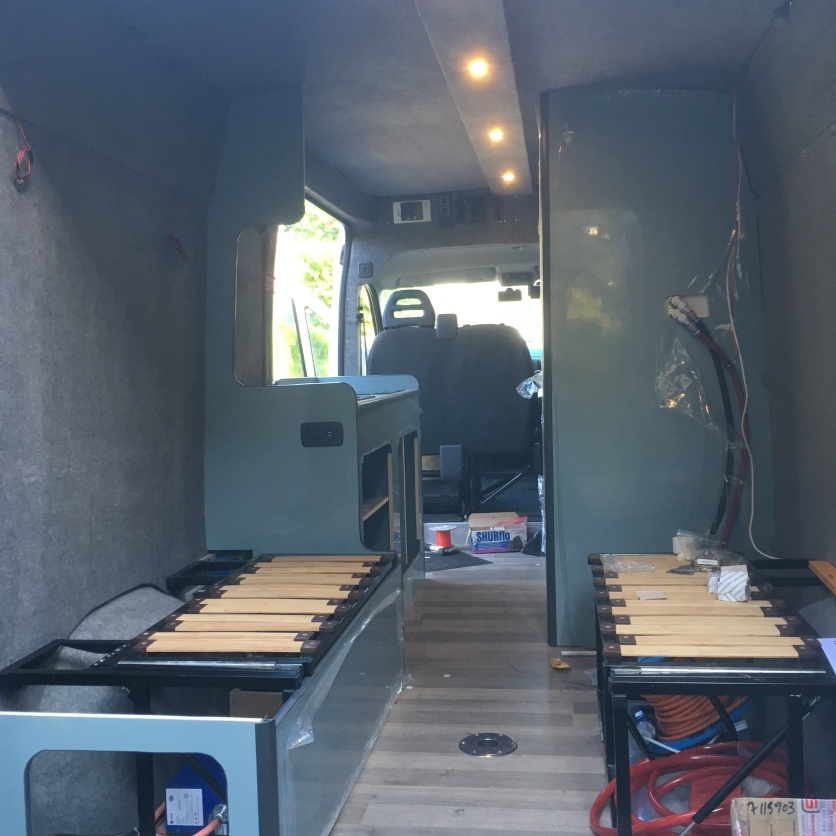 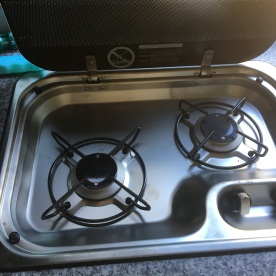 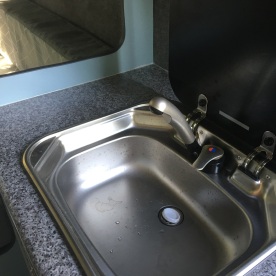 Little touches like the spice rack on the back of the sink for washing up liquid etc really make a difference and use wasted space.

The wall cupboards have holes for the crockery and mugs, and a magnetic knife strip holds knives when not in transit. 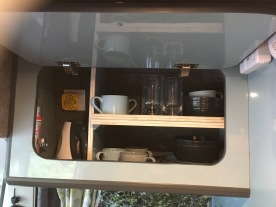 We then built around the bed base and put in the side extension, and ordered the bed foam, 4″ of hard foam laminated to 2″ memory foam, cut to size. I covered these in the fabrics I had bought. 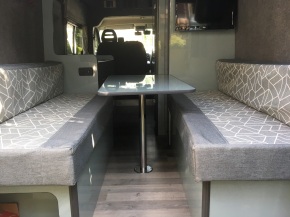 Jason fitted the table base and we made the table and a storage space for it in the wardrobe.

He also put the stickers on the sides, to comply with DVLA requirements. 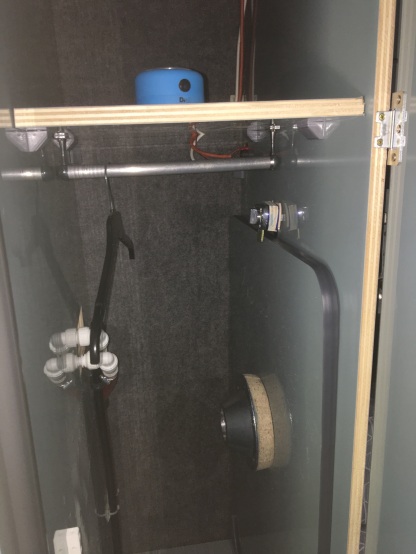 Getting near to finishing, we built the wall cupboards either side, and fitted the TV. 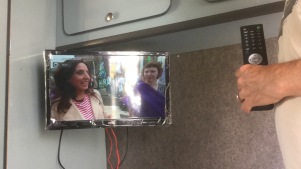 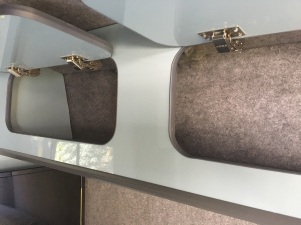 I sewed the curtains, adding small magnets to the edges so they stay in place, and lining them with blackout fabric.

As we had now all the requirements for the DVLA we sent off the registration and it quickly came back declaring Connie to be a motor caravan. Success!

We were now ready to give Connie her first trip out – just a one night stay not too far from home.

I’m sure I have missed some of the process, but we have enjoyed 3 months of labour, and are delighted with the results, she is warm and quiet and comfortable, so look forward to our trips out in Connie.

PS – One addition I needed was a G&T shelf on the back door – success!

Keen traveller, gardener, sailor,and dog lover, on adventures with my husband Ian, family ,friends and of course dogs Reggie and Rita View all posts by jaynesshardlow